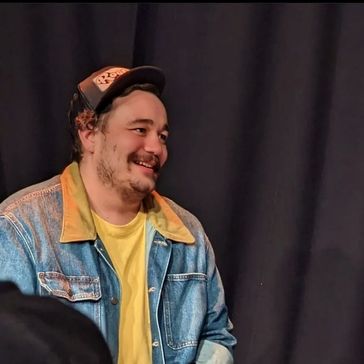 Wyatt McCall (He/Him) attended the Sargent Conservatory in St. Louis, MO where he pursued his B.F.A. in Musical Theatre. He has trained and performed at various theatres across Chicago-land including The Neo-Futurists, iO Chicago, The Annoyance Theatre, and Second City. He has performed in regional productions at Heart of America Shakespeare Festival, Maples Repertory Theater, The Arrow-Rock Lyceum Theater, and Metro Theatre Company of St. Louis. Wyatt is a founder of the improv troupe Shawarmaggedon whom he performs with weekly and is a founding member of The Olde School Shakespeare Collective here in Chicago. Wyatt lives in Chicago with his lovely girlfriend and two cats and believes in the power of bringing honest, authentic, and accessible theatre to his community and beyond. When he isn’t doing any of the things mentioned above, you can usually find him walking along the lakefront for his stupid mental health, cooking food so he can feel like he is in some semblance of control, or listening to his favorite record, Space Ghost’s Musical Bar-B-Que.