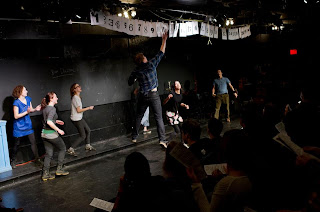 The weekends of November 30 – December 2 and December 7-9 we’ll be presenting our annual, epic Best of Year TML shows, in celebration of both the year that was and the anniversary of the show itself. Besides featuring some of the funniest, fiercest, and most brain-tickling plays produced for the show, it will also feature a monster-sized cast consisting of as many Neo-Futurist ensemble members as we can fit on our stage.

For our 24th year, we’re trying something with Too Much Light that we have never, ever done before. (We are, after all, an experimental theatre company.)

ALL tickets to our six Best of Year shows are now available for online pre-sale.

What does this mean for you, the audience member? It means that for these special end-of-year performances you have the opportunity to secure your ticket in advance, rather than risk being caught on the wrong end of a sold-out show.

Walk-ups are, of course, still welcome! As always, people who take the risk are rewarded with our usual low ticket price of $9 plus the roll of a six-sided die ($10-15).

Pre-sale patrons will pay $20 online to reserve their ticket…but when they get to the theater, they will also roll a six-sided die and receive $1-6 back on their ticket price ($14-19)!

Got it? Here’s a short recap: