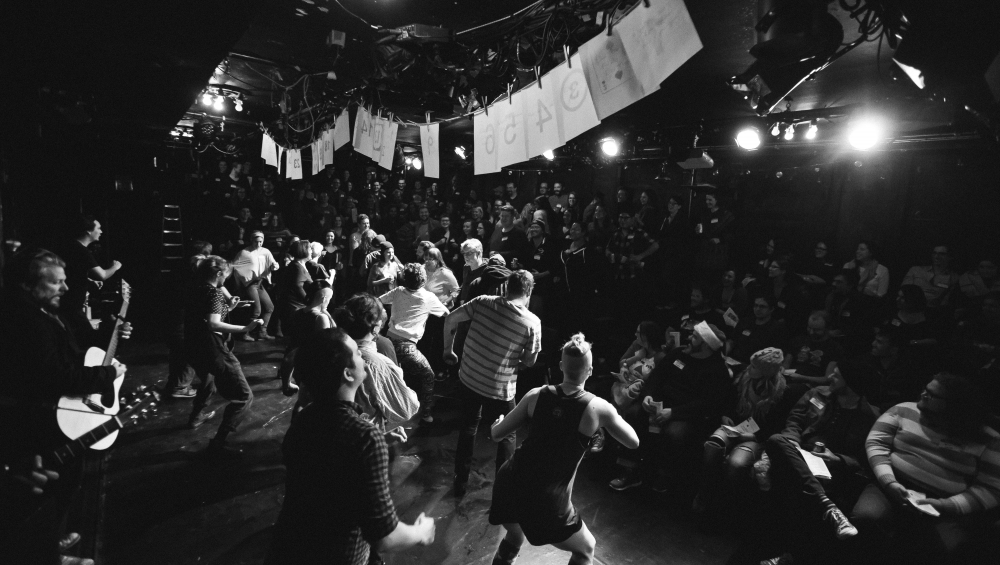 That title is the Onion article headline I imagine would come out if the show Too Much Light Makes the Baby Go Blind was as nationally recognized as, oh I don’t know, President Obama.

Don’t worry, you’re not about to read my take on an Onion article. Those people are way funnier than me. I’m not going to do that and I can’t write for them because I’m about to do something so Neo-Futurist by explicating the humor and intention behind my own faux-headline above. Sincere apologies to those that clicked into this post thinking they were getting into a clever piece of satire and not a pedantic argument. After all, I am who I am (Neo-Futurist!).

My intention in that headline is to draw an important distinction in the sand between “Too Much Light Makes the Baby Go Blind” vs. “The Neo-Futurists,” between “30 Plays In 60 Minutes” vs. “Neo-Futurism / non-representational theater.” And hopefully that intention is achieved in that title by pointing out the ridiculous idea that improvisation could A) “close its doors,” B) lay claim as the longest-running art form in one city, and C) be perceived as having only existed for merely decades.

I want to walk you through my personal journey of becoming a fan of Too Much Light, a champion of theater that experiments, a proponent of injecting actuality into those experiments, and a leader of ensemble-driven Neo-Futurist work. This is incomplete, and in no particular order (Neo-Futurist!):

All that’s to say: the company and the artmaking goes way beyond TML, beyond any individual.

Like I said, those bullets make up an incomplete timeline, in capturing both my personal experience and the broader reach of what defines this company and its work. But I trust that many of you, who are fans of and advocates for the same work that I list above, have similar journeys in the world of performance and theater. And I trust that when we talk about continuing on, past the point at which Too Much Light Makes the Baby Go Blind ends, you understand that it’s only another step in the long history of a movement, in which you, me, and The Neo-Futurists will continue to be a part of.

Hope to see you out there braving the cold tonight and through the weekend, trying to pick up those last remaining walk-up tickets. And if you can’t make it just wait for the summer. It always comes back.

Too Much Light Makes the Baby Go Blind celebrates with its last three anniversary “Best Of” shows this weekend to include not only the best/favorite plays of 2016, but also personal favorites of all time. The very last performance of Too Much Light will be December 31st, after which The Neo-Futurists will continue to add its roster of 9,775 short plays (and 50+ longish ones) since 1988. Go to neofuturists.org for consistent updates.