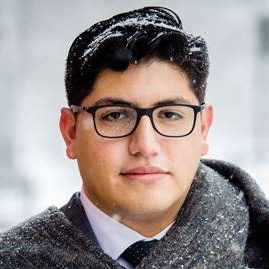 Jorge Silva is a writer/performer, producer, and the Managing Director for The Neo-Futurists.  Silva, a native Chicagoan, was previously the Producing Coordinator for the Goodman Theatre serving as the producing liaison for community engagement projects and the curator for artistic programming.

An alum of Daniel Murphy Scholarship Fund and St. Paul’s School in Concord, NH, Silva earned a dual degree in Government and Theatre (Advanced Undergraduate Theatre Program) at Cornell University’s College of Arts & Sciences. During his undergraduate career, Silva worked with the Committee on US and Latin-American Relations connecting local Spanish speaking immigrant communities to legal resources and ESL courses. While at Cornell, he also lead the nation’s oldest student run Latinx theatre company in the nation, Teatrotaller.

His artistic work eventually lead him to joining Teatro Travieso (Wooster, OH) in Lima, Peru where he was a part of a devised piece – Encuentro: Peru!! –  that performed there and at UNESCO’s World Festival of Theatre School in Bucharest, Romania. He continues to serve as an artistic affiliate for Teatro Travieso.

Before returning to Chicago, Silva was based in Washington, DC serving as the Production Manager for the Smithsonian Institution’s Discovery Theater. Starting as a performer for their signature show, Seasons of Light, Silva went on to employ his design and technical skills for in-house productions and for visiting productions. However, his proudest contributions to DC is being one of the founding members of Discovery Theater’s DCPS in-school arts education program, ‘Tools of Discovery,’ where he helped build arts assisted curriculum with teachers in English and in Spanish, grades Pre-K – 2nd. Silva was also a deviser with the interactive theatre company dog & pony DC and was a part of a collective that developed the socially conscious, trilingual (English, Spanish, American Sign Language) experimental works Toast and Squares.

Silva was introduced to The Neo-Futurists early in his academic career attending performances of Too Much Light Makes The Baby Go Blind, but began his current tenure in 2016 as the recipient of the Neo-Access Scholarship. From there, he joined ensemble members Kurt Chiang and Lily Mooney for The Neo-Futurists’ ongoing experimental essay show THE ARROW. Most recently, he had the privilege of being a part of the Latinx inclusive creative team for REMEMBER THE ALAMO, devised by Neo Ensemble member Nick Hart.

Outside of theatre, Silva is an Affinity Group Leader for the Daniel Murphy Scholarship Fund’s mentoring program and one of the Events and Outreach Officers for their alumni committee. In a similar fashion, Silva also serves as a Career Coach for aspiring theatre practitioners currently in their undergraduate years for The Posse Foundation: Chicago. Recently, Silva was a featured speaker at Latinos Progresando’s flagship community event, MEX talks [2018]; he is excited to return as to Latinos Progresando as a member of the host committee for MEX talks 2019.

Silva is an MBA Candidate at The University of Chicago Booth School of Business as a Neubauer Civic Scholar and is a Global Arts Management Fellow at the University of Maryland.