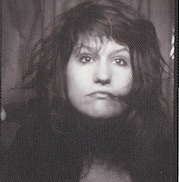 Kristie Koehler Vuocolo was an active member of the Neos from 2003 to 2010. In addition to TML, she also worked on Primetime shows including Patriots, Roustabout: The Great Circus Trainwreck and DareDevils Hamlet. She also conceived, co-directed and performed in A Very Neo-Futurist Christimas Carol. Kristie is the former education coordinator of the Neos and still teaches Intro to Too Much Light: Writing and Performing the Two-Minute Play, which she originally created and taught with Jay Torrence. Kristie is also a founding member of Barrel of Monkeys and  a clown – but not a scary clown. Jeesh. She’s worked with 500 Clown, Blair Thomas & Co., the Factory Theater and is the supervisor for the Big Apple Circus Chicago Clown Care unit.

She currently teaches writing and theater for college kids. But don’t tell them about the clown thing. Honk Honk.