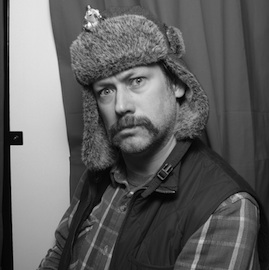 Rob studied at Grinnell College, the London Academy of Music and Dramatic Arts, the Warsaw Academy and The National Theater Institute. He moved to Manhattan in 1995 to write and perform Too Much Light Makes the Baby Go Blind and ever since has worked as a Neo-Futurist as well as with numerous other New York companies. He was involved the NYC Fringe for Icarus and Aria, Doughboy, and Neo-retro-Woyzeck in addition to writing and producing Tightening at the Belt, The 6-Pack and Apocalypse Neo with the New York Neo-Futurists. Rob works for Twist,  a commercial production company, writes poetry, teaches, and has recently enjoyed working with a variety of great artists at the Ontological, the Public, PS 122 and the Kraine. Currently Rob is an active member and the managing director of the New York Neo-Futurists. He occasionally comes back to visit the Chicago Neos and play in their TML as well.