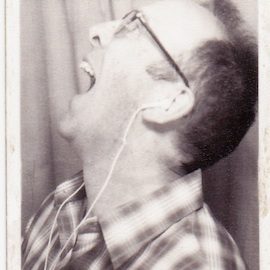 Joe returns as a cast member in The Egg Wrench! (May 12)

Joe Dempsey was an “active” Neo-Futurist from 2002 – 2004. Brief, yes, but just like a DQ Blizzard chock full of theatre nuggets. As well as TMLMTBGB, Joe performed in Greg Allen’s The Last Two Minutes of the Complete Works of Henrik Ibsen (which also ran at Northlight and the NYC Fringe Fest), Greg Allen’s Strange Interlude (as part of Goodman Theatre’s Eugene O’Neill Festival), Bilal Dardai’s Contraption, and 44 Plays for 44 Presidents (made by a bunch of NFists folk). He’s also worked at most of the other theatres around Chicago like Steppenwolf, Chicago Shakes, Court, Lookingglass, and Victory Gardens as well as regional theatres like Milwaukee Rep, Cincinnati Rep, Centerstage (Baltimore), Kansas City Rep, St. Louis Rep, and City Theatre (Pittsburgh). He’s had some one-liners on some TV shows when they’ve come to town and none of the movies when they do. Joe is also a former member of American Theatre Company and The Second City National Touring Company and no, he doesn’t see a pattern.