TIW24: A Fundraiser For The Neo-Futurists was a smashing success! Thanks to all that came out to support live, immediate, and relevant theater in Chicago.

Still want to help? Our GoFundMe page will remain open through the end of the year, so there is still time! Click here to donate to the page, or contact admin@neofuturists.org to discuss other giving options.

Thank you again! See you in the New Year!

TIW24: A Fundraiser for The Neo-Futurists

The clock is ticking on 2019, and as The Neo-Futurists finish up our 30th year, we’re asking for your support in helping us raise $30,000 for 30 Years of Neo-Futurist Theater! Help us provide immediate, essential and activating theater for you and your friends, family and community, here in the city of Chicago, the entire nation and the world at-large.

— Donate to TIW24 now!
— Join the Fundraising Team, and ask your extended networks to benefit The Neo-Futurists.
— Attend the culminating of TIW24 on December 8 @ 7:00PM, at The Neo-Futurist Theater.

Learn More About the Campaign – Visit our Crowdrise page and Donate Today! 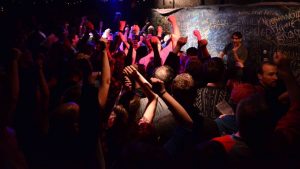 As a non-profit arts organization, TIW24 (previously Can’t Stop//Won’t Stop) is the annual fundraiser of The Neo-Futurist Theater. Since 1988, the mission of The Neo-Futurists has been to create “work that embraces those unreached or unmoved by conventional theater – inspiring them to thought, feeling and action.” While the company has changed in many ways after 30 years, that mission remains consistent, pushing the art-making to move audiences that demand honest communication and reflection in an increasingly fast-paced, hyperbolic world.

We believe in art and performance that defies convention and exercises radical compassion, continually growing and changing to meet/exceed necessities of accessibility, equitability, and accountability. To make that kind of art, we depend on the support of people just like you.