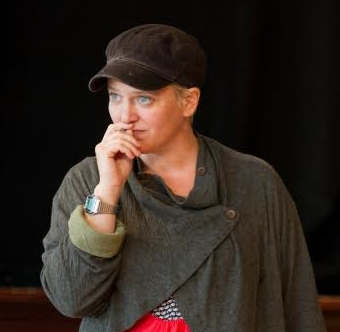 Halena Kays is a theater director, deviser, and performer.  Most recently the artistic director of The Hypocrites where she both performed and directed.  She is the co-founder and former artistic director of Barrel of Monkeys where she created and directed the majority of their public performances. She is a founding member of the artistic collaborative, The Ruffians, and directs their recurring hit production of Burning Bluebeard as well as their other experiments in live performance events.  She is a UT-Austin and Northwestern grad, former member of the Big Apple Circus Clown Care unit, past co-artistic curator for Theater on the Lake and assistant professor at Northwestern University.

Halena is an Artistic Associate with the Neo-Futurists were she directed Pop/Waits, 44 Plays for 44 Presidents, Burning Bluebeard, co-created and directed Daredevils and Daredevils Hamlet and the sight specific extravaganza, Fake Lake. Some interesting Chicago directing credits include: Endgame, Ivywild, Six Characters in Search of an Author at The Hypocrites; The Magic Play at The Goodman, Lord of the Flies at Steppenwolf; On Clover Road at American Blues Theater; Feast (part of a collaborative directing effort) with The Albany Park Theatre Project at The Goodman.  Regionally Halena has directed The Magic Play at The Olney Theater Center, The Actor’s Theater of Louisville, Portland Center Stage and Syracuse Stage, Love Song with The Nashville Story Garden, and Secretary for Nashville Rep’s Ingram New Works Festival.

Halena has been nominated for a Jefferson Citation for Best Supporting Actress and Best Direction, named one of the top 50 “players” in Chicago theater by NewCity, is a recipient of the prestigious 3Arts award and received a signed letter from Mr. Rogers saying she was “special” in 1978.   Proud member, SDC.